This is because an App Service web application is hosted by one or some App Service worker instances. The worker instances are bounded inside the scale unit (stamp) of the site. They don’t have Internet IP addresses assigned and need to leverage their stamp’s load balancer to do the Source Network Address Translation, aka SNAT, in order to connect to external IP addresses.

How does SNAT work in Azure load balancer is documented in Outbound connections in Azure. This blog post covers the things that you need to know in order to troubleshoot SNAT issues in Azure App Service.

How does SNAT work?

SNAT is not a new technology. When you connect your phone to a public Internet site through your home WIFI router, your router does the network address translation too.

The above process is transparent to the worker instance and the Internet server. The load balancer does all the address translation job for them. 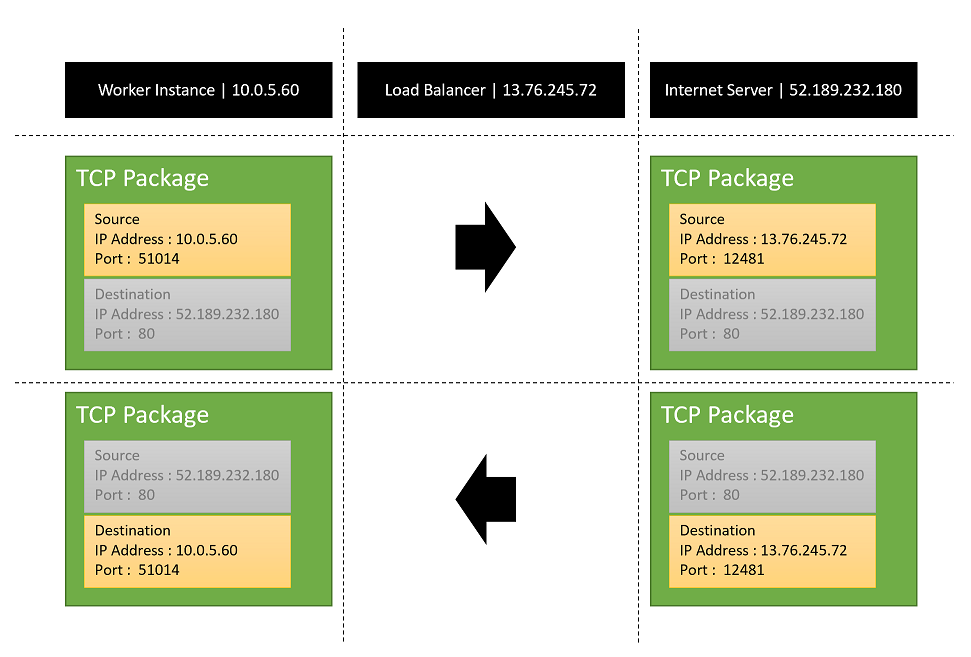 The Network Monitor capture files of the above SNAT flow can be downloaded from:

SNAT load balancer is a shared resource between all of App Service sites in the same stamp. Including the web applications, WebJobs, Functions, telemetry services (Application Insights), etc. All services inside a stamp need the load balancer to establish their network flows to external endpoints.

According to The TCP section of Outbound connections in Azure

Things can get worse if applications open and close connections frequently. According to: The TCP SNAT port release section of Outbound connections in Azure

That means if a web application opens a HTTP connection to call its backend Restful web service once every second and well closes the connection after each call, it will occupy 240 SNAT ports in 240 second.

That also means a busy website whose SQL database connection pool size is 300, will occupy 300 SNAT ports, when its SQL queries execute slowly in the database.

A third example, considering a function app that is triggered by queue messages and saves its results to storage blobs, if at the beginning of a load test, all test messages are dumped into the queue, the function app will exhaust SNAT ports very soon.

In order to prevent sites from exhausting SNAT ports of a stamp and blocking other sites in the same stamp to connect to Internet, an algorithm for SNAT port allocation is required.

Actually, there are 2 algorithms available in Azure load balancer for SNAT port allocation:

Most App Service stamps are currently using the on-demand algorithm and would potentially migrate to the new algorithm in the future. So, speaking of a total SNAT ports value that a worker instance is guaranteed to have, it should be 128.

This could happen in the following 2 scenarios:

When an instance’s SNAT ports are exhausted, the following symptoms can be observed from the application:

If Application Insight dependency tracking is enabled to the web application, we will see a failure like below:

How to solve a SNAT port exhaustion issue for App Service

The general guidance in The Problem Solving section of Outbound connections in Azure can be applied to App Service web applications, including:

Q: Can I observe the SNAT ports allocation metric of my App Service site by myself?

A: The data is currently not available to public. We should not use this metric to test and decide how many outbound connections a web application can use. The best practice is to keep it below 128.

If you do need it, you can still open a support ticket and the support engineer will get the metric from backend for you.

Q: Why cannot I configure auto scale out based on SNAT ports allocation metric?

A: We should scale out, only when an application does need more resource. But if an issue is due to the application doesn’t use the resource efficiently, we should improve the code first, otherwise more instances wouldn’t solve the issue.

160 connections to a single endpoint is adequate in most scenarios, for web applications. If an application asks for more, usually it is due to either the backend service has a performance issue, or the application doesn’t reuse the connections. Scaling out to more instances doesn’t solve the issue in these scenarios.

Q: How is SNAT related to the TCP connections

A: There is a TCP connections usage detector, in the Diagnose and Solve Problems blade of any App Service site. You can search “TCP connections” there to find it. “TCP Connections” and “SNAT Ports” are not quite related.

Q: I have multiple WebJobs hosted by a single site. They run together and share each worker instances of the site’s App Service Plan. They also need to connect to the same external endpoint, which is Azure SQL database. Now they have an SNAT port exhaustion issue, since the WebJobs are complaining not able to connect to the database. How do I know which WebJob opens the most database connections and causes the issue?

A: We don’t have a metric to show us how many connections is opened by each process. In order to narrow it down, please move some WebJobs out to another App Service plan to see things get better? Or if the issue remains in one of the plans. You can iterate, until spotting out the culprit.

In order to reuse the connections, we can change it like below:

This one leaks SNAT ports too:

Which can be rewritten into the following one, in order to reuse the connections of only one HttpClient:

The code is published on GitHub.

You can try it yourself by deploying the code to your site and running the following command in a Bash console: